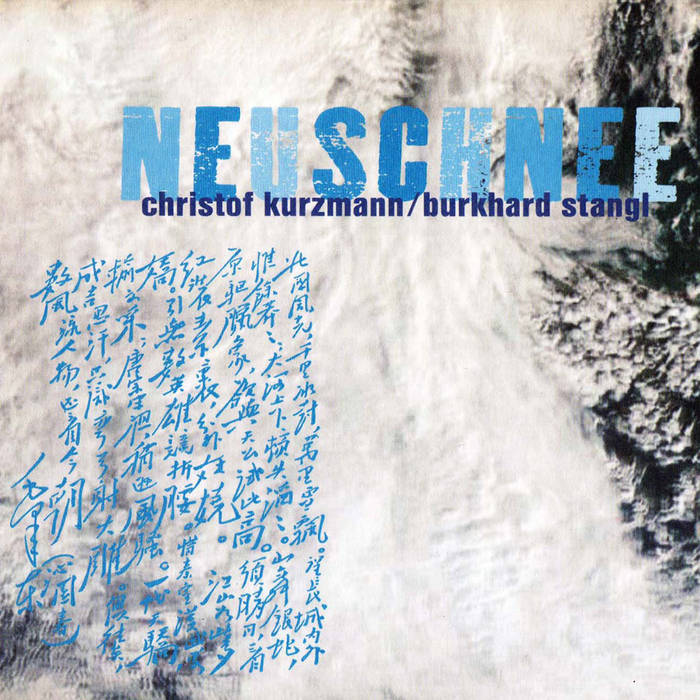 Burkhard Stangl and Christof Kurzmann began their duo 'schnee' in 1999, finally working together after many years of a non-collaborative friendship. Their first album, released in 2000, combined Stangl's acoustic guitar with Kurzmann's electronic sound manipulation. This was an unusual approach at the time, although it quickly became widely copied and very influential. Since the duo was so well-received, they continued their work, playing concerts throughout Europe, as well as tours in China and Japan. At the same time they began experimenting with another fairly unique approach within this area of music, incorporating song structures and pop vocals into their compositions. These efforts led to the recording of a second album, schneelive, an elongated and meticulously structured version of a Prince song, as performed in the AMPLIFY 2004: addition festival at Ausland in Berlin. While schneelive was a snapshot of their approach on a single night, neuschnee is more complex, recorded on three continents in five countries over four years.

Kurzmann has been a prominent part of both the Vienna and the Berlin scenes over the past decade. As an organizer, he cofounded the phonoTAKTIK festival, helped begin the prominent Rhiz club in Vienna, and ran the prestigious Charhizma label. Since moving to Berlin in 2001, he has organized countless shows, including the Berlin half of AMPLIFY 2004: addition. Kurzmann has been an essential part of many Erstwhile-related live events, in Tokyo, Berlin and NYC, and was the first to work at Amann Studios for an Erstwhile release, beginning a crucial relationship for the label. neuschnee is his fifth release for Erstwhile, following a s o (with Ami Yoshida), The Magic ID-till my breath gives out, and the two previous schnee releases.Stangl explores the full range of the guitar, from quiet, melodic plucking to atonal walls of noisy drones. This range and adaptability allowed him to be extremely prolific from 1999-2004, in the collective projects Polwechsel, Efzeg, and SSSD, in duos and trio with Christof Kurzmann and Taku Sugimoto, as well as many others. neuschnee is also his fifth release for Erstwhile, following Wrapped Islands (with Polwechsel and Fennesz), eh (with dieb13), and the two previous schnee releases. Stangl also has a duo album with Kai Fagaschinski in the works for Erstwhile, scheduled for fall 2009 release. These two CDs mark his first new work in some years.

The five tracks on neuschnee form an ambitious meta-song suite, with the various lyrics and musical styles combining to create a whole greater than the sum of its parts. The design is again from Berlin designer Marion Gerth, previously responsible for The Magic ID-till my breath gives out on ErstPop. The front cover juxtaposes a satellite picture of snow with the Mao Zedong poem 'Snow', which the musicians discovered in a book bought while on tour in Beijing.

"After a long phase of experimental and avant-garde work, which inscribed itself in our hearts and still grounds any musical activity, the collection of experiences in originally non-western cultures such as Japan, South Africa or Latin America - each with their own fascinating music - played an important role, too, when we started to think about songs again in a new way and started to integrate them slowly into our delicate musical architecture. The songs or even their fragments are meant as reconciliation: a reconciliation of experiment and tradition, of thoughtful silence and expressive celebration of each moment, of worlds of noises and clearly defined harmonies."-Burkhard Stangl